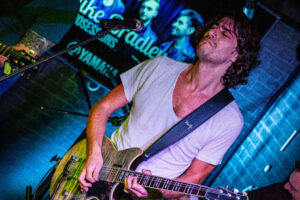 Mike has been playing the guitar since he was 12 years old, and from that first moment his love affair with music and the instrument began. Fresh out of school at the age of 16 he attended the Academy of Contemporary Music in Guildford and completed a year-long Diploma course.

After finishing the ACM his life as a full time musician began, playing in numerous bands and touring up and down the country playing iconic venues such asThe Shepherds Bush Empire, The Astoria, The Underworld and London’s Jazz Café. He’s also been fortunate enough to support industry legends Paul Weller, Blondie and Katie Melua.

Mike’s session work has led to his working on a variety of projects – from performing with stars such as Ricky Wilson and Diana Vickers, to appearing in many TV shows and adverts. Mike loves being on stage performing, but is equally at home recording in a studio – where he has worked with Alex Von Soos (All Saints, Seal, Atomic Kitten), Mike Horner (The Prodigy, Shakira, Bloc Party), and Mike Chapman (Blondie, Suzi Quatro).

Learn guitar wherever you're located - all you need is a webcam!

Customised tuition videos to help you learn at your pace.